Why do we need a Ministry of Mumbai’s Magic?

Mumbai is a city created from seven islands through a series of land reclamations dating back to the 1700s. The same coastline that has been constructed by nature and human engineering is now under threat, according to reports which state the city will be regularly flooded by 2050.

The narrow geography of the city and the growing population makes space a commodity that is ‘more valuable than gold.’ Mumbai’s floodplains: its wetlands, mangroves and salt pans are essential to the city’s resilience to frequent floods. Studies have demonstrated that 50% of the city is under threat of regular flooding by 2050. The green cover within and around the city is critical to mitigate.

The growing air pollution and carbon emissions of Mumbai are rapidly growing due to vehicular and industrial activity. Limited land space and rapid expansion has put the biodiversity of Mumbai at risk – since 2001, Mumbai has lost more than 22% of its green cover, with continuing development shrinking and dividing green spaces and destroying habitats for key regional species. More critically, its mangroves which function both as buffers against flooding and as carbon sinks that are four times more effective than other forests, are rapidly being destroyed by land reclamation, construction, and waste disposal.

Despite government claims of reforestation and protected zones being created in the region’s Master Plan, these ecosystems are irreplaceable. Despite the Bombay High Court ruling that the destruction of mangroves “offends the fundamental rights of citizens”, the direct and indirect effects of urban sprawl will soon destroy them for good. The response to the Aarey threat, from citizens and from the government, demonstrated that there is a gap and an opportunity to create a larger climate movement in Mumbai. There is a large population of young Mumbaikars, who either grew up or moved to the city, who participate in visible socially conscious conversation, and have the potential to be mobilized for causes they identify with. Mumbai stands at a critical point.

With the hope that Mumbai too can become an example to the world in championing sustainable urban planning, Ministry of Mumbai’s Magic was born.  We’re a new collective, that focuses on the digital and the local. Using our creative and social power to protect what makes Mumbai magical. 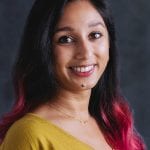 Senior Strategist, Purpose
Sonali is a Strategist with an interest in urban planning and sustainable buildings. She uses her passion for communication and a technical background in sustainability to create strategic campaigns in India.