The many worlds of Mumbai: Bhandup Pumping Station

The Bhandup Pumping Station (BPS) is one of Mumbai’s main sewage treatment plants. To think of such a place as a biodiversity hotspot can be a bit mind boggling. But when you talk to conservationists, photographers and those most patient of nature lovers – the bird watchers – they’ll all confirm that Bhandup is indeed teeming with all sorts of rich life amidst its salt pans, mangroves, creeks and mudflats.

Serving as an entry point to the Thane Creek Flamingo Sanctuary (TCFS) from the Mumbai side, once you enter BPS, you leave behind the various ingrained routines of a concrete jungle life. You leave behind the familiar rhythms of rush, the cacophony of everyday life and a skyline filled with skyscrapers. On this side, things are a bit quieter and gentler. The denizens here are mostly tiny feathered creatures with distinctive plumage. Cheeps, whistles and gurgles are just some of their evocative calls. Some are natives and some come calling from far away lands, truly living the utopia that John Lennon asked us to imagine. While the sight and sound of them can be a delight, a break from the cacophony of city life, so are their names.

Like any other coastal fishing spots, Bhandup has a fairly strong local fishing community. They have gotten used to the presence of birders and sometimes even offer boat rides in the creek for a few extra bucks. For them, this place is both home and a source of livelihood. The health and longevity of this ecosystem is therefore a big concern for them. Having witnessed the protective role played by mangroves in select areas during the 2005 floods, they are today at the forefront of operations aimed at keeping these areas clear of trash. The added benefit being that it helps keep the marine life safe and intact, thus preserving a way of life.

The flip side of a natural ecosystem like this being unknown is that it’s easy to misuse. It reduces attempts at browbeating precious natural resources to make way for “development”. Thankfully, a wider audience has already discovered the Bhandup Pumping Station thanks to local conservationists and the Mangrove Cell of the Forest Department.

We and our partner Waatavaran believe that documentation, especially photographic, is an important medium for building a community that cares about the protection of this unique biodiversity. This inspired us to start a #BiodiversityOfBhandup series on Instagram to start conversations, and reach out to Mumbaikars. The reaction so far has been tremendous. We got some stunning captures of diversity in the Bhandup Pumping Station.

WE AREN’T DONE YET!

It’s important to keep this conversation going. The more Mumbaikars know about the ‘other’ Mumbaikars (both temporary as well as permanent residents), the better we can protect them.

So, join us to celebrate the #BiodiversityOfBhandup. Share your pictures of nature in BPS with the hashtag above and we’ll help you amplify it so more of the city can see the beauty we’re celebrating. 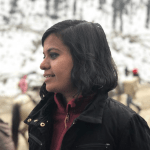 Consultant, Purpose
Shikha is a consultant copywriter with a currently active dislike for 'Work From Office' that predates the pandemic. She has a penchant for long-winded Insta posts and a problem looking straight into the camera.