Harita – The Green Footprint Fellowship is a project spearheaded by Project Mumbai in collaboration with the Ministry of Mumbai’s Magic with the support of MCGM.

The objective  for the fellowship is to build capacity and skills among citizens to build a green community of youth caretakers. To engage the young Mumbaikar and create green ambassadors for our neighbourhood and city by large and through citizen and institution engagement for adopting a long-term association garden across 24 wards of Mumbai. This 3-month fellowship provided an opportunity for youth fellows to become future urban sustainability champions and contribute towards building a green and habitable city for all.

After mapping 5 recreation grounds of A ward and 3 recreation grounds for C ward for The Harita Fellowship program, I knew what to expect and what not to expect. The 8 RGs had already established for me that the footfall for them were majorly hit due to the Covid pandemic. Apart from that, there was a visible difference between the recreation grounds of A ward and C ward which I wouldn’t have realized if I had not mapped any C ward RGs. While the A Ward RGs were huge, the smallest one being 2200 sq. mt , the 3 C ward RGs were just about 250 sq. mt. each. All 3 of them seemed there just for the sake of it, with no users at all at the times of survey and visible neglect in terms of maintenance and hygiene.

The A ward RGs had set a benchmark of how all gardens should be. Honestly, a few of them had issues which seemed appalling at the time of working on just A Ward. But the issues seemed miniscule once I started mapping C Ward. Apart from the size, a few major issues were lack of maintenance and poor hygiene which could be discouraging the locals from using them.

With a predetermined mindset and bias of the RGs of C ward established due to the earlier 3 gardens, I did a quick google search of a 9000 sq. mt. RG known as Durgadevi Udyan at Kumbharwada, Chor Bazaar, Kamathipura. The pictures were awe-inspiring but since they were shot Pre-Covid, I knew not to fall victim to them. I told myself that the situation must be dull drab due to Covid in order to not disappoint myself later.

Fast forward to 13th August 8am and I’m on my way to the Udyan. After a few hiccups in navigation, we were a few meters away from the RG and all I could see around was a concrete jungle with garbage thrown all over the roads and sidewalks. The stench of garbage and various other factors reduced my expectations to zero.

I approached the Gate surrounded by garbage. It was locked but I could see a person jogging inside who informed me that the entry was from the other Gate. Moving onto the other gate, the journey was the same – garbage, mismanagement, hooligans narrow lanes. I reached the other Gate which was surrounded by parked vehicles and a group of people chatting away.

As soon as I entered, it seemed like a different world altogether. It was hard to believe what I was seeing. To verify, I asked a few people around whether it was just a garden or something else. I was greeted with huge grins all around. I could see at least a hundred people all over the place! Kids, uncles, aunties, nana nanis! To see so much activity in times when it was hard to spot a couple of people in gardens was overwhelming. I gave myself a couple of seconds to take it all in. It was refreshing, peaceful and lifted my spirits to new highs.

I was quickly surrounded by the Watchman Gardener/Cleaner who recognized a new face immediately among the sea of familiar faces. Quick introductions later, they were so eager to help me with all the details of the garden. They knew the garden inside out, they knew each and every person there. I was soon surrounded by a couple of locals who too chimed in with their knowledge of the garden. While filling the detail form, a gentleman walked toward us and inquired Raju (the cleaner) what was happening. He informed me he too looked after the garden and was an instructor at the Gym Yoga Club which itself was very surprising to me. I didn’t imagine that there would be a Community Gym and a Yoga Club at all! He took his leave to go to his kids as he called them and asked Ramu to help me with the survey.

Raju and I took a walk around the Garden. I was really pleasantly surprised to see people in every corner of the garden. There were so many kids playing in the kids area with their parents interacting on the benches nearby. By the relaxed nature of the parents, it was obvious they were not really worried for the kids’ safety as this garden was home, all the people were a family. There was a beautiful structure which is a community library where people visit very often as per Raju. It was locked so I could not see inside. Beside the Library was a playing field the size of a football field that was used by the men to play their sports. Raju told me that the ground was also used for all sorts of community activities and festivals.

I was eager to see the Gym Yoga Center. While on our way to them, I could see so many men doing Yoga on the lawns, meditating, doing their own stretches or simply sitting and talking to their friends. The pathways were filled with men and women alike jogging. Age is just a number at this Udyan as I spotted multiple people of every group and gender. I was awe-struck.

We reached the Gym and it was packed with guys who were working out at the instructions of Santosh Sir, who I met earlier. Santosh Sir came out and introduced me to his kids- the guys he was training at the Gym free of cost. Everyone was smiling, laughing, just enjoying life. Their energies were infectious. They all were thanking Santosh Sir for his support they told me how Santosh Sir has helped in building the community at the garden and changing the face of it a few years ago. The story is really inspiring.

Once the garden was redesigned and opened a few years back, initially the community was not cooperative and supportive. The garden would be littered with garbage and the footfall was next to nothing, similar to the current situation of the other gardens I had surveyed until then. Santosh Sir stepped up and took it upon himself to manage the garden bring the community together. He started the Gym for the guys and Yoga Club for the ladies, both free of cost which were huge successes. Over time, the community has come to become a big family and everyone treats the garden like their home.

Santosh Sir took me to meet his other kids, the ladies of the Yoga Club. I was shocked to see at least 30 women practicing yoga, with the older person being 75 years old. They were so happy to meet me, they were unanimously talking and telling me about the garden all at once. They told me how they couldn’t wait for the garden to open due to Covid, how important it was to them. They said that the garden was everything to them, it was where they celebrated each and every person’s birthday together in the Community/Yoga Hall we were standing in. It was also the place where they celebrated all festivals. They would come to the garden everyday no matter what. Their energies and spirits were so powerful, I mentally wished to be a part of something so beautiful. Voicing my thoughts, they told me to visit anytime and that they would love to have me at the garden as well. This was something I’ve never felt, this sense of community and love. It is so rare and beautiful, I told them how lucky they are to have the garden and each other. They all clapped for and thanked Santosh Sir for his selfless service.

Once we were out of the hall, a couple more people surrounded us, eagerly telling me how much they loved the Garden. They profusely thanked Santosh Sir Raju for their services. Raju was wiping away tears constantly, clearly grateful for all the appreciation and love.  They both thanked the citizens for their constant support, without which this wouldn’t be possible.

Seeing at least a 100 people at the garden laughing, exercising, jogging, singing, talking, working out, doing yoga or simply sitting and talking to their friends gave me hope. The energies at this garden is indescribable, I’ll never be able to express how divine it truly felt. It was something that would put a Karan Johar family movie to shame. The people, the beautiful plants and trees, the flowers, the birds chirping away, butterflies here and there, was all so beautiful to experience.

The garden gave me hope that something so beautiful can survive and thrive even in the most unexpected places. It gave me hope that all the gardens in Mumbai can be like this that all of us could be a part of it someday. I hope it happens soon and that we can be as happy, healthy, accepting and loving as the people at Durgadevi Udyan. 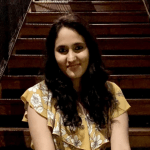 Ruchika is a Harita Fellow. Harita - The Green Footprint Fellowship was a 3 month long fellowship opportunity for urban sustainability champions in Mumbai to contribute towards building a green and liveable city for all.