Circle of life on a Peepal tree

Like many Mumbaikars, we live in a high-rise apartment building in one of the most densely populated areas of Mumbai. While we are close to the highway as well as the local train station, we are blessed with a  lot of greenery in our society complex. This is what helped us stay sane during the lockdown. There are palms, mango trees, frangipani, copper pods, and my favourite – the peepal tree (Sacred fig).

Have you ever noticed that it is always cool under a peepal tree? Somehow, even if there is no breeze, the heart-shaped leaves tend to sway giving off a gentle breeze. The tree, sort of, welcomes you. It is home to various species of birds and other animals like the koels, sunbirds, coppersmith barbet, kingfisher, tailorbird, and the squirrels.

I usually sit on the bench under the cool shade of the peepal tree from where you can observe the antics of a squirrel. In the background, the tailorbird, and the purple rumped sunbird flit from branch to branch. From somewhere at the top of the tree you can hear the call of a coppersmith barbet. Barbets are one of those birds which are heard more often than they are seen. In fact, the ‘tuk tuk’ which goes on in the background throughout the day is the call of a coppersmith barbet. Children were also playing in the park. I was enjoying the symphony. It was one of those moments where you feel the time has stopped.

Recently, I observed a female koel lay its  egg in a crow’s nest on the Peepal tree. Its strategy was very intriguing. The male koel lured the crow out of its nest by making noise as the female waited on a branch above the nest. It laid the egg as soon as the crow was out of the nest.

An Asian koel (Eudynamys scolopacea) is a brood parasite. That is, it does not build its own nest and lays eggs in the nest of other birds such as a  house crow. The breeding season of a  brood parasite coincides with that of its host, the house crow. The cuckoo chicks emerge before the appearance of the first chick of the crow. This way, they monopolize the food provided by the crow couple. Crow chicks may die of starvation but koel chicks do not face this problem. In fact, Koel chicks are the first to grow feathers and leave home. Perhaps, this is nature’s way of controlling the crow population which we see in abundance in our cities.

The peepal tree that provides life to so many creatures is a true-blue native of India. Interestingly, it is dependent on insects for its survival, specifically the peepal tree fig wasp to be precise. You might  have seen peepal trees sprouting out of crevices on various buildings and bridges etc. Ever thought  how  they get there? Obviously, no one will plant a tree in a building crevice. This miracle is a result of peepal seeds being  dispersed by birds that eat its fruit and leave their droppings in far-off places and bingo! a peepal tree sprouts.

Peepal tree belongs to the fig family and its scientific name is Ficus religiosa. The fruits of the Peepal tree which we see on the stalks are called figs.  A peepal tree fruits in April and could have a second flush in October. In these seasons, the tree produces buds which later become figs. These buds swell into figs, however, at this stage, the fig does not take the form of a fruit. It is inside these figs, there is a garden full of flowers that later ripens into the fig fruit.

The smell of this fig attracts a horde of insects which are called fig wasps. For every ficus tree, there is a separate fig wasp that pollinates it. These fig wasps are attracted by the smell of figs. These wasps are small insects and mostly dominated by females that  can pass through the eye of a needle. They are laden with pollen. A fig wasp enters the fig through a gate-like opening. The moment it enters the fig, it is surrounded by microscopic flowers, mostly male. The fig wasp goes inside the fig and lays its egg and dies over there. These eggs are then covered with a protective covering called galls. About 2 months later, the eggs hatch inside the galls. The galls could contain both male and female fig wasps. The male fig wasps do not have any wings but have powerful jaws. They break open the gall and come out searching for a female. It mates with a female even before she hatches from the gall.

The female fig wasps enlarge the holes which the males have made during mating, and it comes out from the gall. As opposed to the male, the female has large eyes and wings. The male wasps help the females to cut open those gall flowers which contain the pollen grains. The female puts the pollen grains in pouches on its body and comes out of the fig helped by the male wasp. Once these twin objects are completed, the male dies.The female laden with the pollen starts its onward journey to pollinate another fig tree and so the circle of life goes on.

It is symbolic in a way, that the great Gautama Buddha attained his enlightenment – cycle of life, rebirth, etc. under a peepal tree. It is possibly one of the most well-known trees, known as Bodhi Tree. While the original Peepal tree where Lord Buddha attained enlightenment in Bodh Gaya perished long ago, a sapling was taken to Sri Lanka to the Sinhala capital city of Anuradhapura in 200 BC and was planted in a temple. It is said that Sinhala kings ruled for 1300 years where the Peepal sapling thrived.

The Peepal tree is also sacred to Hindus, who venerate it as female to the Banyan tree. It finds a special place as one of the most sacred trees amongst the Indian trees and is found in almost all the temples, or if there is a space constraint, somewhere close to the temples. Vows are made to it.  Its leaf is an essential part of the sacred thread. 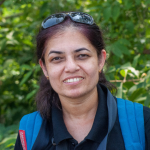 Sangeeta is a chartered accountant by profession. She loves her small trips to the wilderness which enhances her observation and focus in her daily life and work. These trips have shifted her understanding about life and its connection to the environment enabling the shift from the illusion of ‘I’ to the realisation of ‘we’.